Do Your Surroundings Affect Your Calorie Intake? 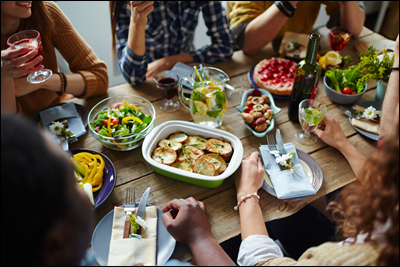 Experienced dieters know plenty of the tricks for keeping their eating in check. Beyond the usual strategies - eating right, getting plenty of exercise and maybe keeping a food diary - they might use more subtle tactics for keeping portions down. They’ll use smaller plates or taller glasses, for instance, to give the illusion that they’re getting more food and drink than they really are. They’ll make sure to put tempting foods out of sight - and keep healthy ones in plain view. What they may not realize is that there are other influences in the environment, much less obvious ones that could still throw their eating off course.

When you sit down to eat, there’s a lot more going on than just you interacting with the food on your plate. You’re actually receiving all sorts of stimuli from your environment, what you’d call the ambiance, the mood or the “vibe” that can have a real impact on how much you eat.

Eating Alone or With Others

Most people eat less when they’re by themselves than they do when they’re with other people. The more people at the table, the more you’re likely to eat. With one other person, you’re likely to pack away about a third more calories. But if you’re with a gang of seven or more, you’ll eat about 75% more than if you went solo. One reason is that meals with others usually last longer than meals eaten alone. So, as long as there’s food around, the longer you sit the more likely you are to keep eating. So my advice would be to pay more attention to what you're eating when in a group situation. If possible, fill your plate once and then leave it at that.

How You Feel About Your Eating Companions

If your dining companion makes you uncomfortable - let’s say you’re having a job interview over lunch - you’re probably going to eat a lot less than if you were out with your closest friend. Not only do we eat more when we’re in the company of friends, but we tend to model their eating behaviors, too. If we’re out with a bunch of hearty eaters, we’re very likely to follow suit.

The Effect of Lighting

This one’s tricky, because lighting can work both in your favour and against it. On the one hand, the brighter the room, the more aware you are of what you’re eating - which would seem to suggest that bright lights might help you eat less. But bright, harsh lighting can also be unpleasant, which might lead you to eat more quickly. Eating quickly doesn’t necessarily mean that you eat less. When you’re shoveling it in, your stomach doesn’t get a chance to tell your brain that it’s full, and that can lead to overeating. On the other hand, when the lighting is soft and warm, you tend to feel more relaxed, meaning you’re more likely to stick around the table longer - and keep eating.

The Effect of Music

Just as bright lights can quicken your eating pace, studies say that playing loud, fast music does, too. However, soft jazz might not be much better as you may not eat as quickly, but your meal is likely to last longer. If you’re home, that might mean a second helping. And if you’re out, it could lead to dessert or another drink. Any music, it seems - in fact, just a generally noisy environment - tends to encourage eating.

The Effect of Colour

The effects of room colour on eating behavior is not as clear, but it has been shown that bright room colours tend to get people amped up - which means they eat more, and more quickly. That would suggest that soft, muted room tones would slow you down. Which isn’t a bad thing - unless it leads you to linger a little longer at the table.