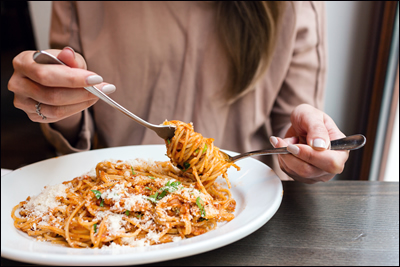 Now there are delicious whole-wheat pastas or noodles with spinach or tomato added, plus rice, corn and quinoa pastas. So, how do all of these different noodles stack up?

Most people buy regular pasta made from a type of high-protein wheat, such as durum or semolina, which gives pasta its characteristic yellow hue. A serving is defined on the package as 60 grams of dry pasta (about a cup cooked, depending on the shape), which has about 200 calories, a trace of fat, about two grams of fibre and around 40 grams of carbohydrate. Not a bad deal. But if you switch to whole-wheat healthy pastas, you’ll save about 20 calories and more than triple your fibre per serving. That’s a great deal, nutritionally speaking. And those numbers look more impressive when you consider what people typically eat – not one cup of cooked pasta, but more like three.

There are gluten-free pastas on the shelf, too. They’re made with grains other than wheat, like corn, rice or quinoa. Calorie-wise, they all come in at around 200 per cup, but they may have less fibre, and some have less protein than wheat pasta. But for those who are going gluten-free, they’re great alternatives.

I’ve also been seeing more ‘super pastas’ in stores, too. These are products with more protein and fibre, and even some touting omega-3 fatty acids. The three extra grams of protein or so usually come from a blend of higher protein grains and ground flaxseeds, which provide the omega-3 fatty acids. These pastas will probably cost you a bit more. Also, keep in mind that the omega-3s found in flax don’t provide quite the same health benefits as those you get from eating fish. You’d be better off cooking up some whole-wheat pasta with some shrimp tossed in.

Those pretty red and green pastas have tomato and spinach powder added to them, but the amounts are so small that they don’t increase the nutritional value all that much. They’re fine if you like how they look on your plate, but they won’t take the place of a fresh or cooked veggie.

On a dry weight basis, all pastas have about the same calories, around 100 per ounce of dry pasta. But most of us think of our portions in cups, not ounces. So consider this: the calories in cooked pasta can range from 175 to 240 per cup, depending on the shape. If you’re a calorie watcher, go for the big wagon wheels or the bow ties instead of the fine angel hair. The big shapes pack less tightly, so you’ll get fewer calories per cup.

I’ll admit that when I tried the first whole grain pastas to hit the market, most were not for me. I found them tough and grainy. But the products have gotten so much better. Their texture is a true match for regular pasta, and the nuttiness of the whole grain adds a depth of flavor to finished dishes that I’ve really come to love.